Blog Menu
It seems like forever since November 20th, 2010 when we decoyed that gnarly whitetail buck in the milo stalks...which was the last time I drew on an animal. March was certainly not marching and I have been getting anxious to get back in the field with the Heads Up Decoy Tom Turkey deke. Opening day success came quickly with Prostaffer Lincoln McClure getting on the board with this new PSE Evo. I, however, had to wait until day 2 of the Kansas spring archery turkey season.

I was accompanied by friend and Heads Up Decoy Prostaffer, David Gillan. David was having bow problems so he graciously volunteered to run the camera. We had a late start due to family obligations so there was no 4 AM wake up call. The weather had been warm, then cold, then warm, then cold, then warm again leading up to opening day. Saturday the 2nd was warm and brutally windy. We honestly...well, I honestly...had little expectations as it was early and I was just happy to be wearing camo and carrying a bow. 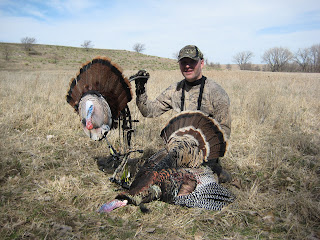 It didn't take long to spot a distant group of turkeys feeding in stubble field. We parked the truck and devised a game plan to sneak up from below the flock and display the Heads Up Tom Turkey Decoy and maybe get lucky. As we made our way through the pasture and draws we spooked the cattle feeding nearby and they ran directly through the spot we last saw the flock. Not discouraged, David and I descended back down into an old farmstead to glass a field located in the low land that was surrounded on all sides by 2 small spring feeder creeks. We didn't need the glass to spot another group of turkeys feeding in the field. 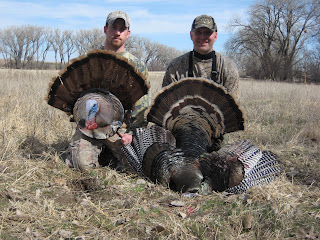 I placed the HUD Tom Turkey in the HUD Bowmount and crawled down beyond the field's edge. The wind was having its way with the decoy in the bowmount, but it was the only option. I hid behind the decoy and allowed the wind to provide most of the moment of the the decoy. The flock was undisturbed by my presence as they fed about 150 yards away. However, one particular tom in the flock was not pleased that another tom was strutting his stuff in his field. The tom walked directly into the decoy, followed by 3 other toms. I shot him at 9 yards. This was my first turkey with a bow and it couldn't have been more exciting.

David had the camera rolling throughout the entire sequence and I was equipped with the ContourHD on my hat. Most the "hat cam" footage was of the ground, my hand, and my bow...except for the part when I drew my bow and the turkey enters the screen at point blank range. Click the link at the bottom to view the video.

Special thanks to David Gillan for helping. 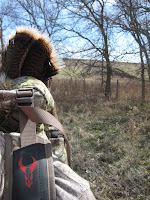