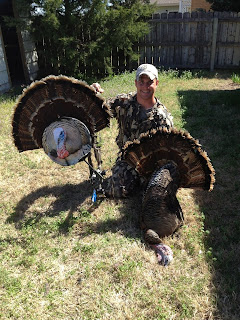 I still remember when the topic of a Heads UP turkey decoy
was discussed. I was extremely excited about the product,
but i'll openly admit I was a bit skeptical as to whether this
was really going to work. I remember thinking to myself,
"These animals have the sharpest eyes in the woods, are we really going to be able to pull this off?" My questions were
soon answered with results a person could only dream about.
April 2011 marked not only a defining moment for Heads Up
Decoy, but for myself as well. I was filming for owner Garret
Roe and I was fortunate enough to be witness to the first
turkey being killed while using the hud combined with the bowmount. My reaction....SPEECHLESS!
You can only imagine how I felt when it happened again, and again and again. Two weeks into the season we were all tagged out.

After the way the previous spring had treated us, my anxiousness was at an all time high as April 2012 approached. To top it off, I drew a unit 4 turkey tag which allowed me to hunt the same area
that I spend a lot of time in during the fall chasing whitetails. While in a deer stand I've encountered I
don't know how many turkeys and could do nothing but sit and watch and wait for the day when I
was lucky enough to have that piece of paper in my pocket.

I had planned on leaving around 4 a.m. but this plan came crashing down when I overslept and woke
up around 7:00. I frantically threw all my gear together, hit the road and started thinking strategies. A
few weeks before I had been shed hunting in a different area of the unit and had spotted birds....time
for plan B. I pulled up about 8 o'clock and began the hike down into the bottom, immediately hearing
gobbles. I cautiously eased my way closer to the echoes of fired up toms and stopped about 100
yards away from where I thought the birds were. I still hadn't sighted them but I was also confident
they hadn't seen me. With the decoy secured in the bowmount I knelt down in the middle of ankle
high wheat and let out a hen call. They responded right away. After about ten minutes of talking back
and forth I realized there was a problem. There was another section of wheat on the other side of a
thicket which is impossible to see through, these birds weren't going to budge unless they had some
visual confirmation. I had no sooner decided to make a stalk around the thicket when another gobble
erupted to the east of me. I let out a few yelps and he fired right back. Two toms made their way
down off a hill and onto the wheat, at this time they were approximately 200 yards away and 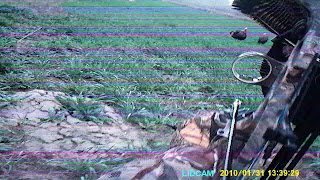 closing....FAST! They were hugging the edge of
the field but from where I was sitting I could see
them through a small group of trees. When they
cleared the last bend they saw my decoy, let out
two simultaneous gobbles and began an all out
sprint straight at me. I stood my ground and
when the birds hit 20 yards I finally drew my bow, but they kept coming still at a dead out sprint. At
5 yards they finally stopped and my 2" Grim Reaper was on its way. It was 8:30 in the morning of opening day, I had been out here for maybe 30 minutes and I had a tag filled. It doesn't get much better then that!