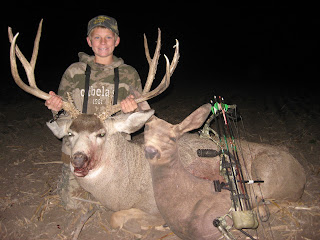 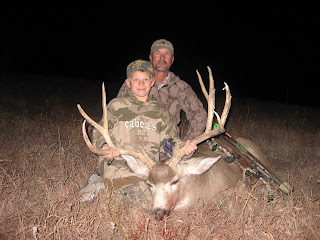 Referenced in "Chasin Prairie Bucks" there was one more tag to be filled...Dalton's. Dalton out-did Dad in a BIG way. A Father and Son hunt for the ages. This is Dad's version...

As my 12 year old son, Dalton, jumped off the bus, I asked him, "Do you want to go hunting?" Without much hesitation he said, "Yeah, let's go." Within minutes we were heading down the road to our hunting spot.

The deer were already up and feeding. One of the bucks I had watched through the summer was in a group of a dozen. There were few options for a stalk in the open stubble field so I positioned Dalton in a weedy draw with to hopes that I could gently push them his way by showing myself. One of the does "freaked" out and ran the opposite direction. The rest of the deer followed including the buck.

Having a good idea of where the deer were heading I went back to pick up Dalton. We moved about a 1/2 mile and began our stalk down the draw not knowing if the deer were in there. A few hundred yards later we spotted the deer in a wheat field. They were 400 yards away. We slowly worked down the draw, stopping and glassing the group trying to figure out our next move. Then, for no apparent reason, the "freakout" doe took off again heading back to the first weed draw that Dalton had set up in. It wasn't looking good, but to our amazement, the buck and one doe stayed put in the wheat field. Things were beginning to look better. Now we only had to beat 4 eyes, 4 ears, and 2 noses.

Still 400 yards away, we were running out of light and wind. W had about 45 minutes of shooting time left and a 300 yard crawl to a cedar tree. I am sure we sounded like a herd of elephants in the dry grass as we noticed the doe was focused on the noise we were making moving down the draw.

Using the decoy, the goal was to make it through 20 yards of dry, noisy grass. Dalton knocked an arrow and I grabbed my range finder. We made it 4 steps when the buck heard our soft steps and stood up looking out way. With the cedar tree still between us and the buck we were still in the game. We moved up the hill as the buck move down the hill towards us. The buck stopped on the edge of the cedar tree staring at the Heads Up Decoy that we were now using for a blind as well as an attractant. To my amazement, the buck continued toward us. Dalton was positioned slightly behind me at full draw. I struggled to get a range, finally got a range. "30 yards", I whispered. The buck took 5 more steps and stopped; he was looking directly at the decoy. Dalton concentrated and shot, sending an 85 grain Magnus Stinger zipping through the bucks ribs and lungs. "You drilled him!" I said. We sprinted towards the top of the hill were the buck had bolted to see him pile up 100 yards away.

We celebrated a our hunt and stalk of a great buck with hugs and congratulation's. We both looked at each other and thank the Lord our God for giving us such a glorious experience, one father and son will relive for many years.

The Heads Up Decoy kept the buck around to allow Dalton this chance at a great Kansas prairie buck.

Great hunt and thank you for sharing your story and pictures. Please click the link below to hear Dalton's story of his hunt.
Dalton's Interview