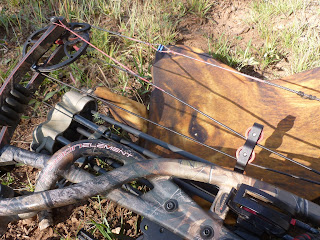 The canyons and ridges in the rugged Wyoming backcountry remained silent during my early morning hike. On a morning this calm, bugles should have been echoing everywhere, making my bowhunt a little easier. I conceded that I would have to rely on my calling skills to create some action. I eased my way westward, still-hunting along ancient elk trails, slowly gaining more elevation. Suddenly, I heard some branches break ahead and slightly below me. I paused, listening to stirrings of elk moving through the forest.
I stepped forward to some small pines, quietly removed my pack and unbuckled my Heads Up Decoy. I clamped that likeness of a cow elk head to a chest-high branch, cleared an area to kneel in, nocked an arrow and then softly cow called. I patiently waited five minutes, and then sounded off with a locator bugle. A short, muffled grunt returned through the trees, definitely a bull elk. I estimated him to be about a hundred yards away. A slow 10 minutes went by before I bugled again. This one was met with silence. In fact, the next dozen were met with silence. The only sound was the occasional snap of branches or a hoof on a log. It was an agonizing wait. 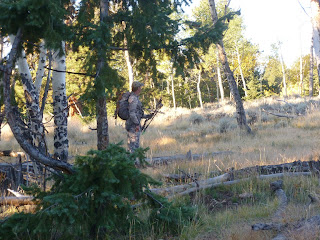 Anxious for the long stalemate to end, I arranged the decoy a little differently and crawled forward for another 30 yards. The forest floor was covered with branches, pine cones and needles and sounded extremely crunchy. I felt if I went further, I’d push the bull out for sure. Finally I found a place where I could set up in front of a stump with some low brush for cover and once again I carefully cleared a place to kneel. When I was ready, this time I ripped the loudest, nastiest bugle, and that’s when the real excitement began…..
Brittle tree limbs cracked and shattered into pieces as the bull plowed his way toward me. He was mad as hell, huffing with every breath and coming in fast, trying to intimidate the bull that had just challenged him. I caught glimpses of chocolate colored legs and ivory tines as he snaked his way through the dense blowdown. He paused briefly and I could tell he was looking at the decoy. He screamed a challenge and continued toward the decoy. When he passed behind a large uprooted tree at 40 yards, I drew my Hoyt to full draw and prepared for the pending shot, but couldn’t stop the gentle shaking at the tip of my arrow.
I focused intently on my anchor point and kept my sight pins on him. He was close now and as he stepped broadside from behind a tree, my 30 yard pin was on him solid and I pulled through the release. Whack! The arrow hit a little high and rocked the bull to his knees. As he dropped and stumbled, I furiously nocked another arrow and sent a second one through him. He stumbled for another 60 yards, then was down for good. I usually like to spot and stalk, but now feel very confident when calling, especially while using my decoy. 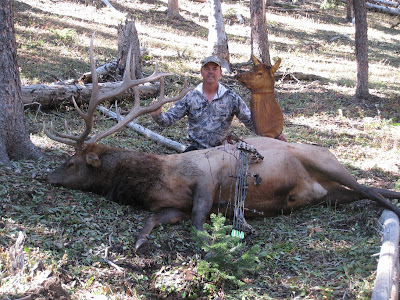 The full story detailing Ron's hunt for his 2012 Wyoming bull will be featured in an upcoming issue of Extreme Elk Magazine.