A Mule Deer tag is hard to come by if you’re a non-resident wanting to hunt the Plains of Kansas. While I’m not superstitious, I was fortunate enough in 2011 to draw a Archery Mule Deer tag. This was the first time I would have an opportunity to hunt the beautiful animal. I had dreamed of hunting a mule deer for years with my bow. It was finally going to happen. As far as a mule deer destination, Kansas probably isn’t even a thought for most people. But in 2009, that was my first time too hunt Kansas and I was their bow hunting whitetails. While I did manage to take my best whitetail to date I kept seeing mule deer and that got me eager to hunt them.
Now 2011, I had my Archery Mule Deer tag and on Halloween I traveled to Kansas. Arriving mid afternoon I scouted that evening and saw some nice bucks. The next morning I was perched on a hill glassing the area.  I found a nice buck and made a stalk up a CRP drainage. I had bought a mule deer doe decoy from Heads Up Decoys and I used it on my approach. As I made my way under a fence and up the drainage I eased the HUD mule deer doe decoy up in front of me. A moment later I noticed the buck looking my direction.  He saw the decoy and headed right in my direction immediately. I stuck the decoy in the grass in front of me and got ready. Within seconds he covered 100 yards. He got to 30 yards and I eased my bow back. He was so focused on the decoy he never flinched and kept coming. At 20 yards the shot happened with the arrow blowing through the front shoulders. He turned and ran over a little rise and out of sight. I ran 50 yards and looked over the rise and he was going down 40 yards from me. I watched for a moment realizing what I had just done. Actually what the HUD mule deer doe had just did for me. I looked back over my shoulder at the HUD decoy sitting up in the grass and smiled. Then turned back toward my buck and thanked God for the opportunity and for making me a bow hunter.   My first mule deer…I was hooked on bow hunting mule deer. 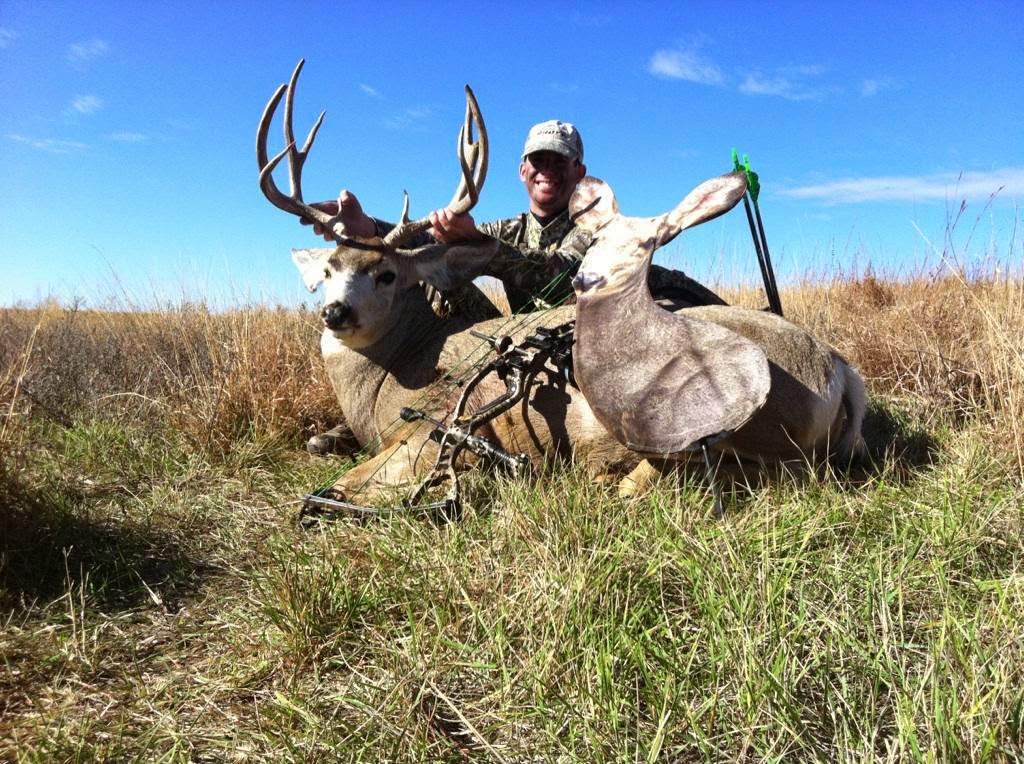 Going into 2012 I opted not to put in for a tag with other obligations to take care of that fall. Then came 2013 and I was going to put in for a mule deer tag. With the tag’s so hard to draw I thought there’s no way I would be fortunate enough to get another mule deer tag. When the draw results came out I was going back to Kansas with my second mule deer tag. I was ready for another opportunity at a nice buck.
With two hunting trips in 2009 and 2011 under my belt and a scouting trip in late August 2013 I was set for the first of November for my hunt. I wasn’t going to just settle for a buck, I wanted a true trophy, a 170 of better! With all the prep of my gear, practicing countless hours shooting my bow the time was here. I arrived Halloween evening and with the wind howling from the northwest at 35 plus (welcome to Kansas) I opted to glass from the truck that afternoon. I glassed a cut corn field from a distance and saw lots of deer with two bucks worth a closer look the following morning.
The first morning found me several hundred yards from the cut corn. As day light slowly started to come to life I could make out mule deer and over the next  few hours I watched as the deer moved in and out of the field and bedding in the adjacent draws. While I did see the two bucks from the night before they weren’t what I was looking for on this trip. At mid morning I met up with my uncle. He had been scouting other places and we compared our buck sightings of the mourning. It was clear he had seen a deer I wanted to get on.
I made a plan for the afternoon and at 2pm I was dropped off at my destination. As I got my stuff ready I couldn’t help but notice the wind was ridiculously high. I’m talking guest to 45 maybe more! I thought man if I get a shot it’s going to have to be top pin range in order to make a ethical shot with the wind like this. As I started to head west in the pasture I knew where I wanted to be.
There was a deep draw about ¼ mile from me that ran north and south, to the south about a mile was a cut corn field and I knew the deer would be headed to that field to feed that evening. As I moved closer to the draw I saw a vantage point that I wanted to glass from. I started to crest over the hill when I suddenly saw the rear end of a mule deer doe standing at the bottom of the draw. I instantly dropped to the ground. I glassed the area and there were four does and a true trophy mule deer in the mix. The first thing that got my attention was the deep rear forks  on the right side.  As soon as I saw that I thought there’s my boy. From there I was probably 200 yards from the group. It’s a miracle they hadn’t spotted me! But with the wind and my camo leafy suite they probably both saved me. 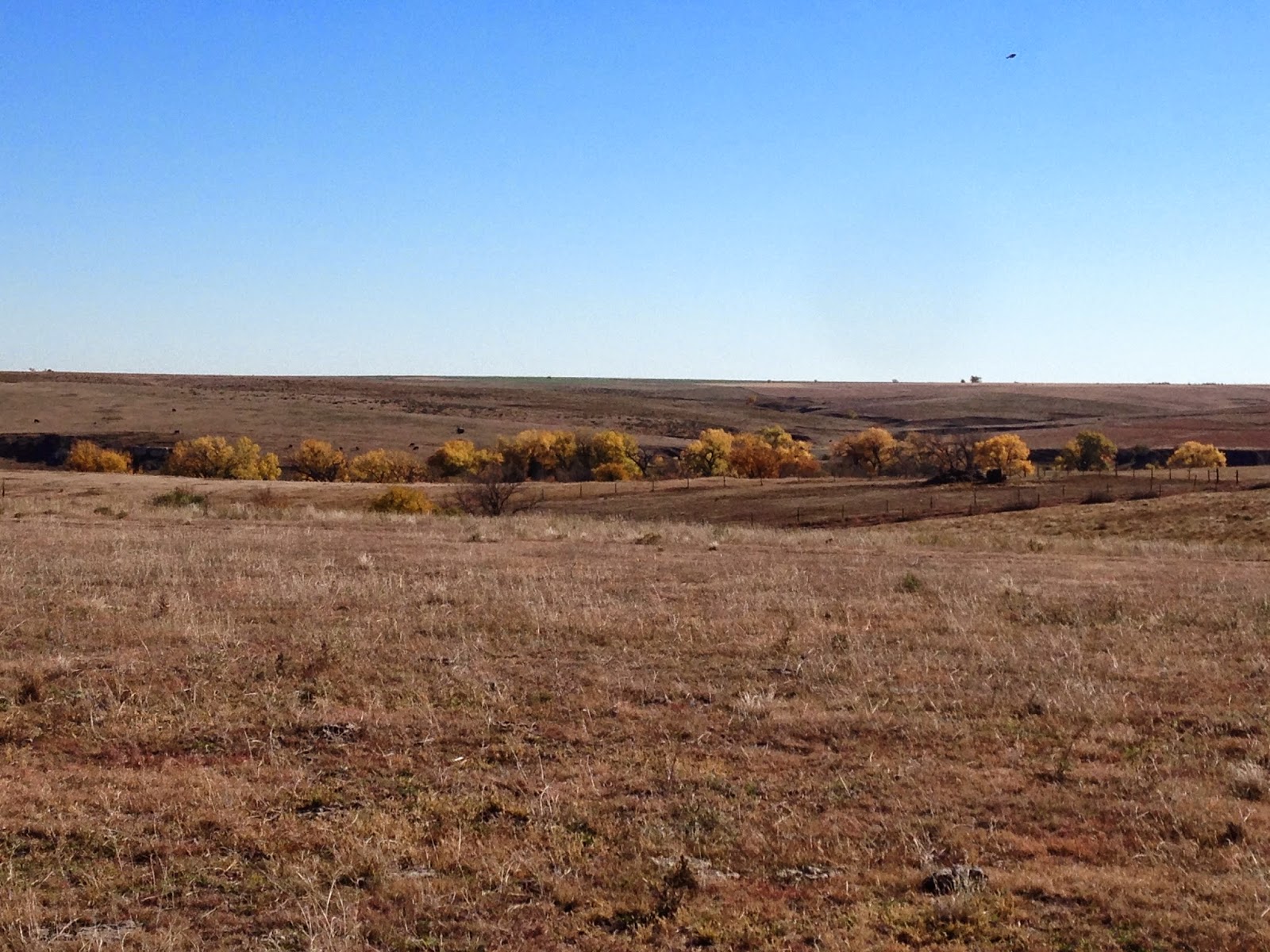 I watched the buck for several minutes and it was obvious they weren’t going anywhere. There was a deep cut that fed down off the hill into the draw about 100 yards to my right and they were standing at the mouth of the cut in the draw. I back tracked out of sight and moved down the cut towards the group. I noticed a dog leg in the cut so I made my way to that point. I peaked over some yuccas and there they were about 100 yards. The bucks rack was breath taking and I knew I was going to do all I could to get a shot at him. The problem was I couldn’t get any closer from here because of open space. I watched him for over an hour though my 10x binoculars. He had mass that was top notch and extra points that made me drool! As the afternoon got shorter the does began to slowly move south to that corn field. I thought I’ve got to get ahead of them in the draw and hopefully ambush him. I back tracked up the hill and ran 500 yards to the south to another cut that ran down into the draw. I stopped at the top and got down behind some yuccas to collect my thoughts. I couldn’t see the deer yet and was waiting for them to appear any second but they didn’t. I said to myself, I need to get down this cut right in the edge of the draw to have a chance.
I started working my way down slowly with the HUD mule deer doe up in front of me.  I kept thinking that any second they are going to walk out but they didn’t.  I moved on and finally got into position.  I peaked over the edge and could see 80 yards or so and no deer. Perfect I thought, I got some tumble weeds and put them in front of me for a little cover and had some yuccas behind me…this was perfect. I sat there and realized the wind had died some and that the draw was a wind brake which was great because that meant I could shoot across the draw if needed. 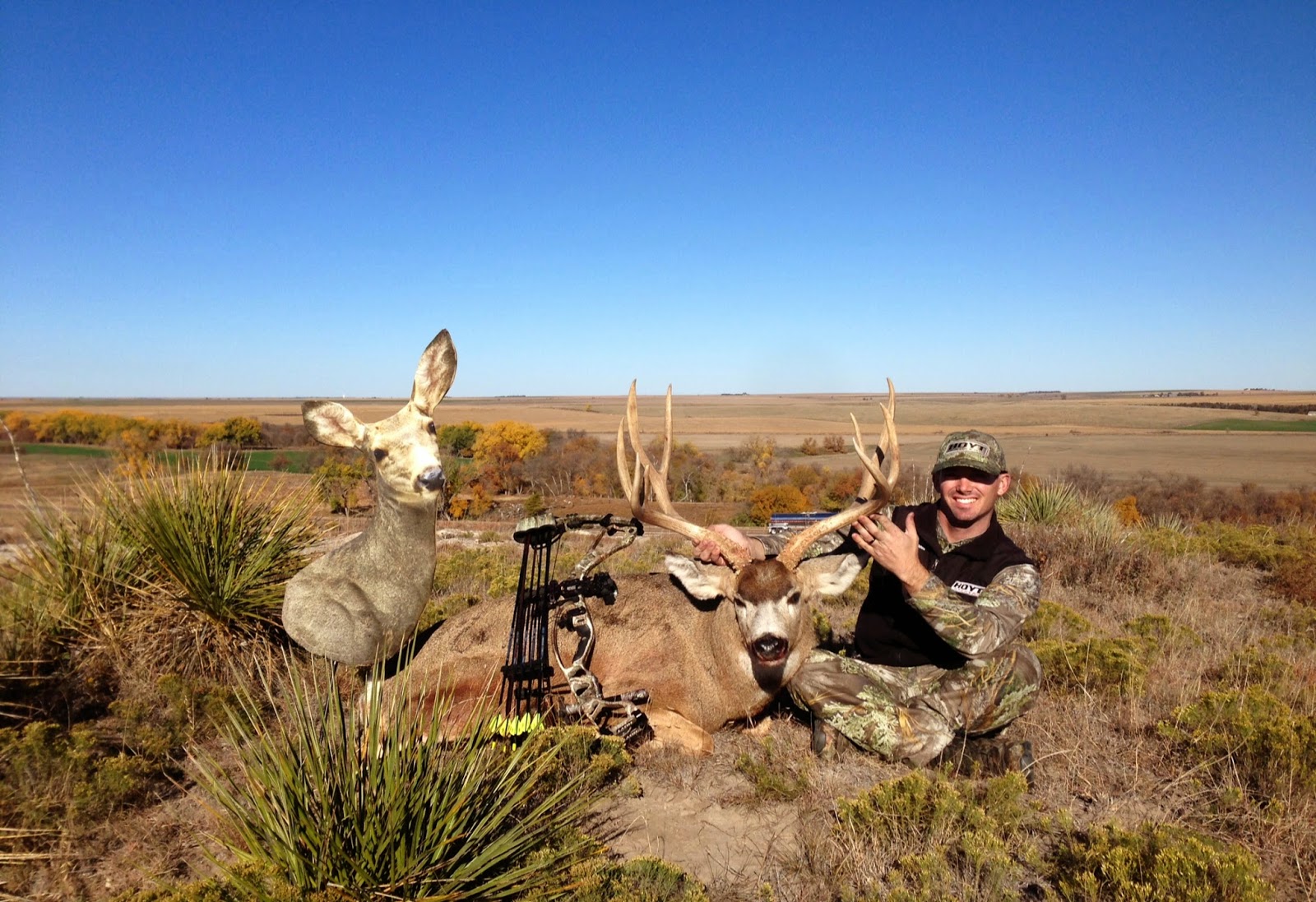 I ranged some land marks to make sure everything was ready. I looked back up the draw and saw the does headed my way. I got ready. The does fed by and I ranged them, 31 yards, 34, 35 and 38 yards. They never looked my way and kept on south toward the corn. I kept waiting for the buck. I slowly looked up the draw, no buck yet. I eased up and crawled back behind me with my HUD mule deer doe decoy  and stuck her in the ground so he could see her when he got about 50 yards. I hurried back to my position.  It was about 5 minutes and he appeared headed my way. He was walking and feeding down the middle of the draw right on the same path as the does.  As he came down the draw he made his way to the far side of the draw. I bleated and he stopped and looked straight at the mule deer doe decoy. With his attention focused on the decoy I eased my bow to full draw. He never knew I was there. At 47 yards I settled my 50 yard pin and the shot happened, the arrow flew true and the buck went down in sight. I sat there for a few minutes thanking God for making me a bow hunter and the opportunity to see a buck of this caliber and to have made an ethical shot. As I walked up on this deer I noticed more mass and character than I had earlier that afternoon. I had truly out done my 2011 mulie buck. That’s what I had hoped for. I had succeeded on two archery mule deer hunts in Kansas and I pay a lot of that success to the HUD mule doe decoy.  Mr. Roe is making an awesome product for us bow hunters. If you’re going to spot and stalk mule deer you’d be crazy not to have this decoy with you at all times. It can and will make your hunt more successful period.  Like Mr. Roe says, Be Mobile… Stay Mobile! Thanks for offering a superior product for us bow hunters!!  Keep up the great work!!
My buck 2nd buck gross scored 172 5/8 inches and netted 166 2/8.