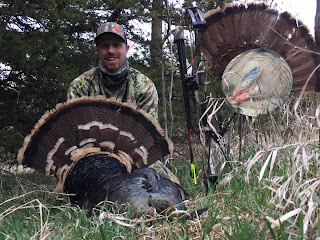 After many months of digital scouting and preparation, Royle Scrogham set off for his first turkey hunt in Nebraska and it turned out to be one his most memorable hunts yet while using the Heads Up Turkey Decoy. Here is his story.
By Royle Scrogham
April 6th had finally arrived. I woke up to the sound of my alarm beeping and stepped out of my small popup camper. I could hardly believe it but after a year of planning and studying maps, I was finally here in Nebraska. Even though it was almost two weeks into the early archery season, I didn't care, I was happy to be here! The first morning was a little disappointing, as I only heard one gobble and it was on private. My goal for the day was to cover as much ground as possible, locate some birds, and maybe get lucky in the process. By mid-afternoon, I was starting to wonder if I needed to head to a different spot when I spotted four jakes coming across the ridge in front of me. I dropped to my knees, showed them the Heads Up Decoy, and threw a few soft yelps their direction. They only stopped for a few seconds to look, and then continued on their way down the ridge.
Knowing they were probably a little intimidated by the mature fan I had on my Heads Up Decoy, I decided if they weren’t coming to me I’d go to them. Keeping the Heads Up between them and me, I headed straight for them. They let me crawl right up to 40 yards. Settling my pin on the closest jake, I squeezed the shot off and it found its mark. Moments later I was standing over my first Nebraska turkey! 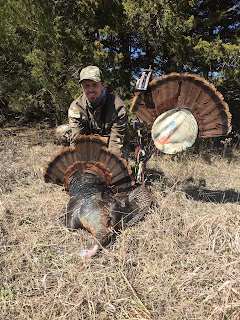 Now, this isn’t where the story ends, it’s just getting started. This was the first day of a ten-day hunt. My bother and another friend had joined me on this trip. Later that afternoon at another location I loaned my Heads Up Decoy to my brother. I had chosen to leave my bow at the truck even though I had another tag burning a hole in my pocket. My brother, having only heard my tails of how well the decoy worked, was soon taken by surprise. I called two long beards in to 20 yards while all three of us where hiding behind the Heads Up Turkey Decoy in an open field. His heart was pounding so hard he couldn’t hold the pin on the gobbler and skipped an arrow over its back. The birds cautiously walked away, but didn’t give him time to nock another arrow. Looking back at me he said, “That’s just not right!” He was in total disbelief.


The next few days began to almost run together as we walked countless miles, either bumping birds that wouldn’t gobble or birds on the roost flying down and heading to private land. Six days after I had taken my first turkey, I found myself in a thicket; I had heard several birds fly down into it that morning. As I approached the thicket a bird gobbled. He was only 100 yards or so away, and if this was going to work, I had to get setup now! The only spot I had to setup was in front of a cedar tree which was surrounded by saplings. The farthest shot I could get would be 15 yards to my left. I was not happy about this setup to say the least, but it’s all I had. After a few soft calls, the bird appeared directly in front of me a mere 30 yards away, but I didn't have a shot. The bird was cautious, slowly walking looking for any excuse to flee. Getting ever so close to the 20 yard mark he stopped; He laid eyes the Heads Up! The image I saw after that moment will forever be ingrained in my memory. He hit full strut, exposing the most beautiful Rio fan I had ever seen! I came to full draw as he strutted into my 15 yard shooting lane. The arrow seemed to be in slow motion as I watched it disappear in the tom. 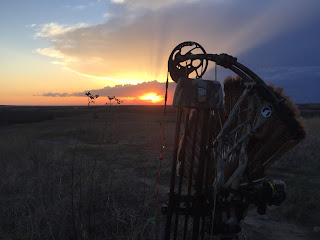 As the tom flopped on the ground I had to take a moment to thank the Lord above and to take in what had just happened! As the hunt had just began to go south, it had changed in a glance and I was standing over my first DIY Public Land Nebraska Rio!

For Royle's contributions: He received a slick H.U.D Hat and T-Shirt. Join the Revoluion