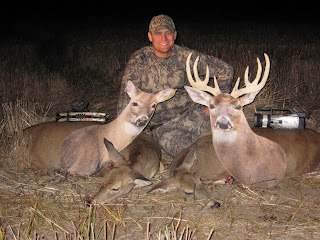 Due to family and work related obligations, there was no weekend hunt so I took Friday Oct 15th off. I had extended an invitation to my newest prostaffer to meet me for an afternoon/evening hunt for which he graciously accepted. I met Matt shortly after noon. We scouted, hung stands, plotted, and schemed about an evening assault.

The wind was blowing from the SSW at about 10-20mph so I felt that a ground approach in a long narrow strip of cottonwoods may produce some action. This particular strip of cottonwoods snaked its way through picked corn and wheat stubble in a north-south fashion, 5-10 yards wide and about 300 yards long. The cover in the strip was dense enough to hide without the use of a pop-up blind. I placed the whitetail doe decoy and the whitetail buck decoy 20 yards behind our "stand" location. Matt chose the wheat stubble side. I chose the corn stalk side. We waited for deer to begin to move from a nearby bedding area.

Having consumed a sugar free Red Bull at the truck shortly before our sneak in, I was particularly attentive. The 20 mph wind gusts were not enough to keep me from hearing deer moving in a small milo field about 200 yards away:^) Four deer, 2 does and 2 fawns, appeared in the wheat stubble and were making their way towards us. I believe the mature doe had picked up the doe decoy and slowly worked her way towards our location. Matt made a slight weight shift to position himself for a shot for which the doe picked up the movement. The "peek-a-boo" game was on. For roughly 30-45 minutes Matt and I did nothing but blink as the doe stared Matt down, most of the time from less than 5 yds away. Matt was wearing Sitka Opti-Fade camo clothing which blended perfectly with the cottonwood Matt was leaning against making it impossible for her to make out his profile.

We eventually out lasted her and as she finally fed towards the decoys, Matt was able to draw and shoot the other doe standing broadside at 25 yards. She expired within 40yds. At this point, all heck broke loose as the other doe began to blow and stomp her way back in for another look. She moved off to the location where the 1st doe was shot. Matt drew and released another arrow. The 2nd doe also expired within 40 yards. It was a great hunt even though there were no trophy antlers. I was able to capture 47 minutes of footage including both shots. Matt filled both his antlerless tags, and the landowner was pleased. Video will be posted soon.