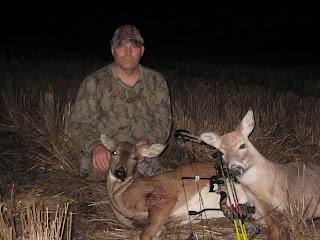 It appears that I have become a trophy whitetail doe guide. This marks the second weekend in a row that I have been the witness to another doe being harvested.

My brother Jeff joined me for a weekend ground assualt for anything brown and legal to shoot with archery equipment. Saturday morning began with a "bang" as I set the alarm clock wrong. Rather than the standard 4:30am wake up call, I shot out of bed at 6:39am...whoops. It worked out fine, we were able to spot a good muledeer in the area shortly before sun-up for a future day.

As stated previously in the week, our intention was to do some rattling and calling to lure in a buck...which we were unable to accomplish Saturday morning.

Saturday evening found us scrambling around due to a shift in the wind direction that essentially blew our initial plan out of the water. We would later find out that it worked to our advantage. I let my brother make the decision on the particular options that were available to us, and to his credit, was rewarded later in the evening as a big fat whitetail doe walk within 10 yards of him on her way to investigate the Heads Up Decoy 25 yards behind us.

As this was taking place, the light in our hiding spot was dim and I believe she picked up on the flashing red record light on my camera...she went back from where she came giving Jeff a 20 yd, slightly quartering-to shoot which he place perfectly. She expired 60 yards away.

I always enjoy hunting with my brother Jeff. I was lucky that I had him growing up because he is a big reason for my passion for hunting, particularly archery hunting.