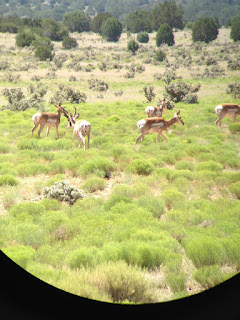 story and photos submitted by JON YOKLEY
About the 3rd week of July the draw results were posted for the fall hunts here in Arizona. My friend, Ken Thomson, and I DREW!!...not one but 2 tags!! Pronghorn and Bull Elk, both archery tags. These are both second choice and in highly hunted public land areas so this would require many hours of scouting and serious strategy.
The Pronghorn would be first with the opening day of 8/21/15. We started with Google Earth and topical maps to help make the decision on where we would concentrate and begin setting cameras. Once cameras were placed and working, we began hours of glassing and looking for sign. Through the first 4 weeks we learned a lot and found some decent herds that held some good bucks. Our cameras weren’t producing Pronghorn at all, instead we found countless elk. This was due to our heavy monsoon rains that kept producing large amounts of rain leaving standing water everywhere and of course scattering the Pronghorn even more.
The decision was made to make this happen on the ground with spot and stalk. The use of our H.U.D. mobile decoys were possible because this is pre-rut and I prefer this method over sitting any day. Day 1 was full of opportunity as we found Buck # 1 and Buck #2 in the same area. These were notable bucks to us and both would score mid 70’s. Buck #1 had 6 does whereas Buck #2 wanted them. This would make an ideal situation to decoy once in range. We watched as the satellite buck, which is buck #2, try to gain control of the does but the herd buck, buck #1, had other plans. A half mile out, a great fight started, as the 2 bucks met. We grabbed the decoy and moved as fast as possible to the fighting bucks. We knew that if we could get there it would present a shot or maybe two. As luck would have it the fight broke up and we were just 150 yards out. The herd buck took his does in to the juniper trees while the satellite buck moved away. This was a perfect opportunity to use the decoy. We presented the smaller buck decoy to the satellite buck and he responded slowly. As he approached with caution and stopped inside bow range, I knew this was as close as he would get so I settled my pin on the buck then released. I missed!! I shot just an inch under his chest. He moved away and when he was out of sight we made our way back to the vehicle deciding to leave this group alone until the next morning. My pride was hurt because I really wanted this buck! 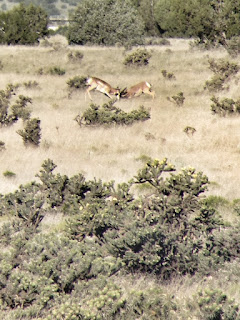 It was Ken’s turn now so we went in search of Buck #3 (another low 70’s buck) about 4 miles away. We searched and searched for him. After an hour we found him with his 7 does. He was in a great place to decoy so the plan was made. We made our way to a position to start the process, the decoy was raised. He was curious and started to commit slowly, and then would hang up but still inside of bow range for an out west hunter. I ranged and Ken released his arrow. The buck jumped the string so fast he left the arrow behind him unharmed as he took his does and moved on out.
On the second day we decided to pursue the satellite buck that I had missed the day before. I was up to shoot next and felt ready. After glassing for about 45 minutes we picked him up and made a plan. I made an attempt on him in the wide open but it went the buck’s way. I failed again. We watched as buck #2 moved toward the back of this huge valley. He was heading in to a juniper patch so I quickly worked my way through the trees to try and get ahead of him. As I started glassing below I could see him a few hundred yards out working towards me, but this time he picked up a smaller buck.  I slowly moved in to position as this was going to be great because the wind was perfect and they had no clue that I was there. The smaller buck fed to about 40 yards as the other buck held up. After about 5 minutes he started moving across from me and stopped inside my comfort zone. I settled my pin on the spot and released. I heard that familiar crack and I knew he was hit. He quickly left the area to end up bedding in a huge cactus patch. After about 30 minutes I settled down and I could see that the buck had not left the area so I started my slow stalk towards him. This took about an hour to locate him after minimal blood on the ground.  I glassed every cactus and was finally able to turn him up. I had filled my 2015 tag! He was larger than I thought because he grossed at 76 6/8” putting him well into Pope & Young and just a few inches under the Boone & Crockett minimum of 80”. This buck is very special to me because of my history with him and numerous pictures throughout the scouting time. 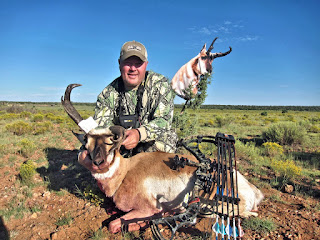 On day 3 we searched for an opportunity for Ken to fill his tag. We found many antelope which produced a few stalks but none would give any shot opportunity. That day ended way to fast but Ken was still in great spirts knowing that we were going to be back hunting after a few days of work at our real jobs.
It was now Thursday and our 4th day in the field. We had decided to work an area where we have seen some great bucks and also heard of a great one in particular known as Unicorn. We were told he has one solid, normal horn and a deformed horn growing along side of his face. We started out glassing up a few does but couldn’t turn up a buck so we moved on. We were heading to an area where we had seen the most sign from previous scouting trips. It wasn’t long until picked up a single and it was a great buck. We didn’t study him too hard but knew that he was a shooter. The plan was to get above him in the junipers and work toward him. We started moving to where we saw him last but at a slow pace, glassing and picking every little bush apart. Finally, we heard him grunt and quickly picked him up. He was moving through the trees and unaware that we were there. Once again the wind was in our favor so we became very aggressive to try to get in to position to decoy this buck. Before we knew it we were there. The buck was 80 yards and moving at an angle that would present a shot. Ken knocked an arrow and I grunted to stop the buck while showing him the decoy. The buck stopped and locked on to the decoy, I gave Ken the yardage, and he released his arrow. The buck was hit well! As I glassed the running buck I told Ken “You just shot the “Unicorn Buck”!  We were both in disbelief that he just took one of the notable bucks in this area. We were able to watch this buck fall inside of a 100 yards. As we approached him we couldn’t believe the mass and character that this buck had. We also saw the deformed side was growing down and into the side of his face. He ended up with a gross score of 72 4/8” Pope & Young points even with his goofy horn.  If his deformed side was equal or close to the good side he would have grossed right at 80” Boone & Crockett minimum! 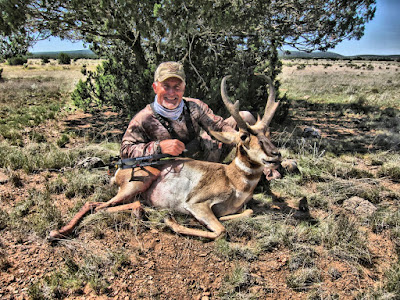 What a season start this was. Two great Pope & Young bucks in just 4 days of actual hunting.  As the phrase goes, “Scout Hard, Hunt Easy”.


Now it’s on to Bull Elk in the northern part of Arizona in an area that I am very familiar with. Season opener is 9/11/2015.