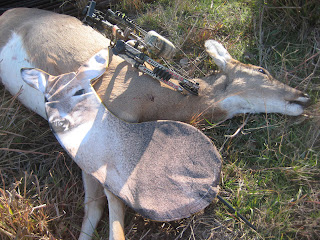 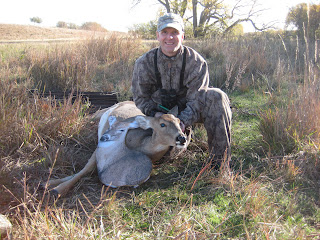 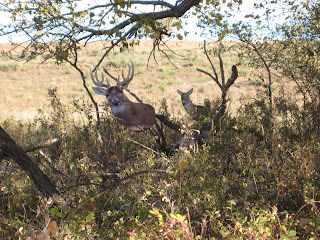 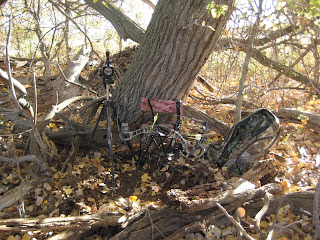 It appears that I have a doe magnet in my pocket. These whitetail does are making me look like a genius...those of you who know me certainly know that genius would not be one of those words one would associate with me. I took today off and was again scrambling around trying to figure out a plan of action for the morning as my initial plans did not pan out.

I woke up early and was particularly efficient getting my gear together. My plan was to sit in an "island" of huge cottonwood trees that sat on the fringe of a busy travel route. Sitting on the ground was again the plan of action and since I had only threatened at the notion in years passed, I needed to get there early to find the right set up. If I wanted to get to my planned destination any earlier than I did, I would have had to spend the night out there.

There was a stiff SW wind so conditions were perfect for the set up. I placed the decoys behind where I planned on hiding. The buck was about 15yds behind me and the doe decoy was 25 yrds behind. Both decoys were on the edge of the island clearly visiable from a distance.

I managed to have some deer activity which lead a doe and her two fawns in my lap. They would feed and look up at the decoys, but she would not present a shot. Another doe appeared and slowly fed her way in the direction of the Heads Up Decoy. I was trying to film my hunt so there was an extra degree of difficulty trying to get footage and a shot. The second doe walked right into the decoy set and was standing quartering-to at 10yds or less from me. I was at full draw and let her have it. The arrow buried into her chest, entering in front of her shoulder and exiting behind the opposite shoulder. She piled up in about 60 yards. I was very happy.

I managed to capture the draw and shot on camera. This makes 4 does that have come into the decoys that we have been able to harvest. The big bucks will come.
http://www.youtube.com/watch?v=peqkzCQdFHw